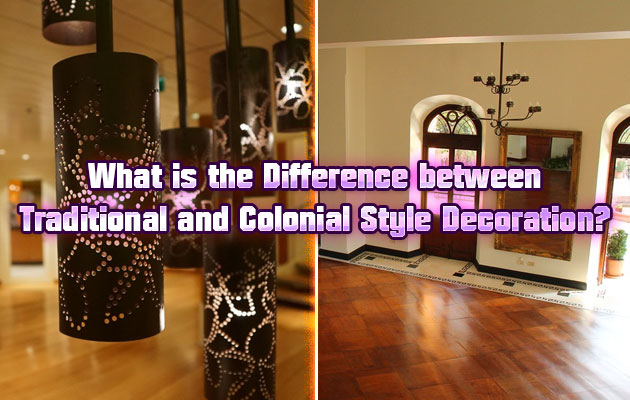 If you would like your home to exude a little more taste of history, then there would be no other design theme more perfect for your house than the traditional and colonial styles. Both these styles may overlap in many elements, but they are very different from each other.

First off, they are different in terms of scope. Colonial style refers to decorating inspired by the décor and architecture during the Colonial era in America, which lasted during the late 1400s to around the early- to mid-1800s. Judging by the word itself, the style is named Colonial because homes are built and designed by different colonists. There are many variations of the Colonial style that were utilized during this time.

Meanwhile, the term “traditional” refers to a broader and more encompassing style, which includes colonial. Usual traditional styles gain inspiration from the design of the late 18th century until the early 20th century. Almost all design styles that emerged before the mid-1990s are considered traditional, whilst the styles that were developed since then until today are considered modern and contemporary.

Whenever you think of a colonial style house, perhaps you have pictured a rectangular home with an entry door at the center and paired windows on the other side. It probably has a pointed roof with a steep slope and a central or paired chimneys visible on top. You’re probably right – colonial styles are known for their love for symmetry, same as most traditional styles. But there are different variations of the colonial style, such as:

The style originated in the 1600s and was very popular during the first half of the 1900s. It has distinguishing and unique elements that make the style easily identifiable as Dutch Colonial. These types of houses typically have an appearance resembling classic barns, a gambrel roof, a porch with extending flared eaves, gable dormers, gable-end chimney/s, and columned porches. Original Dutch Colonial homes have brick or stone façade, but nowadays, any material would work.

One of the most common colonial styles, Georgian Colonial gives a sense of elegance and formality, being inspired by the Greek and Roman classicism. They were popular during the reigns of British monarchs such as George I, George II, George III, and George IV, thus the name. The style became popular in the United States until the late 1700s and was revived during the early 20th century. The entrance of Georgian Colonial homes is typically paneled with a decorative crown and framed with classic, simple columns.

Also known as the Adam style, the Federal Colonial style gets its roots from the classicism of Rome. It was adopted by homes in the United States during the 1780s to around 1815, sharing the name with the era when it was adopted, the Federal Period. The style is usually characterized by brick walls, decorative embellishments, tall columns and doors with an elliptical or fan-shaped window. This style screams wealth and grandeur.

The British Colonial style screams “I have traveled the world” on its design and choice of elements. It was popular during the 19th and 20th centuries, featuring the exotic travels of the British Empire. They borrowed styles and design elements from India, Africa, the Caribbean, and Asia and adopted it locally and in the United States. It brings a refined and elegant look, while at the same time giving a relaxing and comforting feel. The interior of British Colonial homes often displays leather trunks that work as storage, furniture made of rattan, bamboo, teak or sisal; and exotic textiles showing local scenes. It is the ancestor of the Caribbean and Hampton style for home design.

Visible in the early Spanish colonies in the North and South America, the Spanish Colonial style emerged in the 16th century and was revived during the early 20th century. Ranch-style house originated from Spanish colonial architecture. It features elements such as terracotta tiles on the roof, stucco-clad walls, open windows, curved or arched entryways, and inner courtyard and patios.

Other colonial styles for homes that are rarely seen today are French Colonial, First Period English, and Early Classical Revival.

Windows in a colonial home are symmetrically placed on both sides of the central front door. The placement of furniture is grouped in formal, balanced appearance.

Colonial style boasts of formal entrances. Since they are placed on the center of the house façade, they are made grand, with large panels and a decorative crown on top, which is called a pediment. There are times when the pediment is extended and supported by columns, thus making a porch.

On the exterior of colonial homes, you will always see a brick, clapboard or shingle siding.

Traditional style homes have a timeless appeal, exuding elegance and familiar comfort that always make you feel at home. We won’t be elaborating all types of design styles considered traditional (there are so many) but here are the key elements found in those types of homes: Same with colonial styles, traditional styles often observe symmetry when it comes to architectural structure, furniture placement and even in displaying decorations.

Traditional elements are known for their elegant finishing touches. Walls and furniture are accented by moldings; accessories and seating have detailed trim work. These may be simple or intricate, but they sure do create classic lines.

Traditional style doesn’t make use of loud, vibrant colors. Walls are of neutral colors such as white, cream, beige, tan and taupe, but it also makes use of browns, blues, greens, yellows, and reds, as long as they are mellow. Pale colors can be enhanced by bronze accents, wood tones, and accessories.

Florals, stripes, plaids, toile, and plaids all have a place in a traditional house. You may mix and match them up, but always keep symmetry intact. Damask fabrics and small, floral-all-around patterns are common.

Traditionalists decorate in a logical manner – they display the same items together. All figurines, china, books, photo frames, and vases are placed in an organized, symmetrical order. Paintings on gilt frames, crystal chandeliers, and flowers on intricate vases are the usual accessories to traditional homes. Just make sure it’s elegant and classy, not eclectic and edgy.